"Those who cannot learn from history are doomed to repeat it." ― George  Santayana

Peter Bunyard was a founding editor of the era-defining 'Ecologist' magazine, which for nearly twenty years was based near Wadebridge in Cornwall. Phone interview by Rupert White.

What were you doing before you became involved with The Ecologist?
I studied Natural Sciences at Cambridge, then went to Harvard and did post-graduate research on insect physiology. I came back to the UK in the mid 60's and drifted into feeling concerned about the environment.

Did anything in particular prompt these concerns?
Nothing particularly concrete, but I’d read Silent Spring by Rachel Carson and that had stuck in my mind. 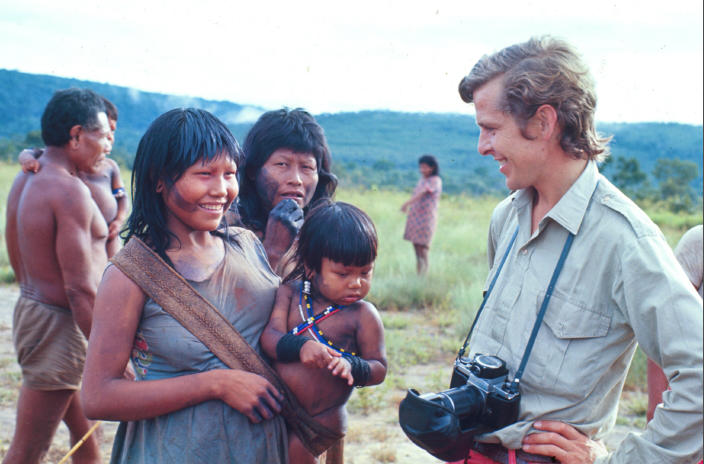 Were there equivalent writers in the UK at that time?
There was Kenneth Mellanby at some point in the late sixties. But the big trigger that brought the people who were the first editors of the Ecologist together, was an article in the Sunday Times written by Norman Lewis on the genocide of Amazon Indians in Brazil: something which was fomented by the Brazilian government. It was a horrendous story, which included dropping measles-contaminated blackets on villages and settlements of uncontacted Indians. It was part of a process of land reform, whereby people were induced to go into the Amazon and start clearing the rainforest. I just had this vision when I read the article, that our own Western civilisation would collapse once we’d cleared the Indians from the Amazon. At that time it was a really apocalyptic vision.

Then I met Teddy Goldsmith in London, and he invited me and one or two others to join him in getting The Ecologist off the ground.

And the offices were originally near Charing Cross?
Yes, in Craven Street which runs next to the station. Because of that article in the Sunday Times a lot of people were brought together. Hanbury-Tenison (above) became the director of what was initially known as the Primitive People's Fund – dreadful name – now called Survival International.

That was the catalyst for The Ecologist. But the magazine got off to an appalling start. Teddy had hired a chap as editor-in-chief who was a journalist rather than being fundamentally concerned with environmental issues, and he fell foul of Teddy and was fired.

Is that when 'Blueprint for Survival' came out? It proved very influential and I understand it formed the basis of the first Green Party manifesto.
I think by that point production had shifted to Teddy’s house in Kew. Limits of Growth produced by MIT in Boston wasn't exactly an inspiration, but it gave strength to the arguments in Blueprint for Survival. 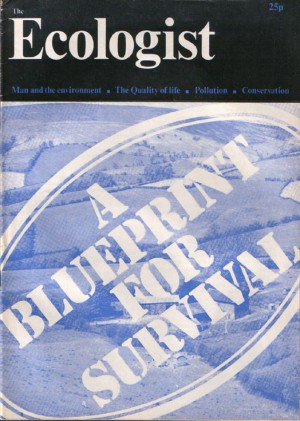 In 'Blueprint' there is a big emphasis on living in small sustainable communities. And there was the important concept of the 'stable society'.
Teddy, on rational and ideological grounds, believed in a hierarchy of integrated processes, with the wellbeing of the planet being maintained by small, stable societies. And because they were stable and were living sustainably, like an indigenous culture, this would lead to planetary stability.

Some years later when Lovelock came up with his Gaia hypothesis, it fitted very neatly into the notion that life itself would in fact develop a stable climate, and that evolution was fundamentally leading towards the stability of the planet. Gaia-in -being. That all fitted in with The Ecologist's belief system.

Michael Cardew, the potter who lived near you in North Cornwall, was dedicated to the principle of hand-made rather than factory-produced objects, and the kinds of communities that emerge as a result. There are some interesting areas of overlap.
Yes. Definitely. I'm sure youre right about that. I knew Cardew, though he was in his eighties then. And craftsmanship where the individual is concerned with his own well- being fits nicely into the framework.

Why did The Ecologist move to Cornwall?
It came about because the explorer Hanbury-Tenison was living in Cornwall, and still is - near Bodmin (Cardinam). He and Teddy were close at that time and I know that he and Ben Messer-Bennetts came up for the party in Kew after 'Blueprint for Survival' had been published. I think there was a strong feeling of the need to get 'back to the land' to try and make a community of sorts down here.

It wasn’t exactly a cooperative community, but it was a community of all the people involved with The Ecologist. And so we all came to Withiel. 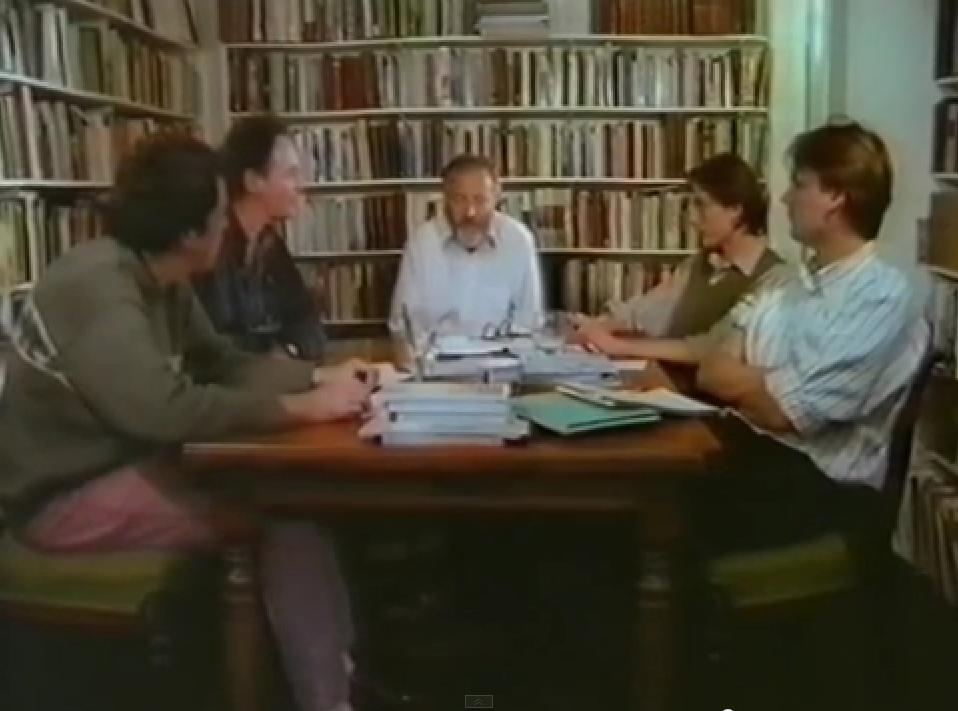 And the move was also an attempt to put some of the ideas in Blueprint into practice?
Absolutely. It was 1972 when we came down. We all lived near each other, but in separate houses. People were selling up at the time and it was quite easy to find properties.

Mike Allaby, Robert Allen, myself and Teddy, who had invited his Oxford friend Jeremy Faull down. Teddy had bought a farm with two houses on it, and sold half the farm to Jeremy. They were called Bosneves and Whitehay (Whitehay pictured left).

Mine was called Lawellen Farm. The farms were all quite different really. Lawellen was the most radical I suppose. Teddy wanted to be organic and at one point they had South Devon cows. Teddy and Jeremy were running their farm together.

I used to sell milk, and in fact some of the milk I produced went across the little river here to Jeremy Faull's barn to make the cheese that came to be called Yarg. So Yarg started here, and it was milk from my Jerseys and Guernseys which kicked off its production. I also had goats, and pigs. I had two working horses, using them in place of a tractor.

But it floundered because it was all-encompassing in terms of time, and with no money coming in, I had a mortgage. But there were some successes. In the dry summer of 1976 my fields were the only ones that were still green! I had sown a deep-rooting crop. Meera Behn, the lady who was with Gandhi in India sent me a lot of books about living on the land, and organic farming. Meera Behn was the name that Gandhi gave her.

It wasn't completely communal living: you shared resources, but it sounds like you still lived in conventional nuclear families, for example.
Yes.

And during this time you kept The Ecologist going, printed in Callington, with an office in Wadebridge itself...
Once we were ensconced in Cornwall, we would have semi-formal editorial meetings in Wadebridge (73, Molesworth Street), where we discussed issues and content. Later, when the production moved to Worthyvale Manor, Slaughterbridge, Camelford, the discussion about content and editing in general took place more informally at Whitehay, in Teddy's booklined library (picture above). It was always a little haphazard in terms of what to include.

Much later, once Teddy had moved to Richmond, where he had an Ecologist Office, Simon Retallack took over the editing; that is after fracas with Nicholas Hildyard. We then produced some special issues such as the one on climate change and its consequences. That was one of the best issues ever, and quite prescient. 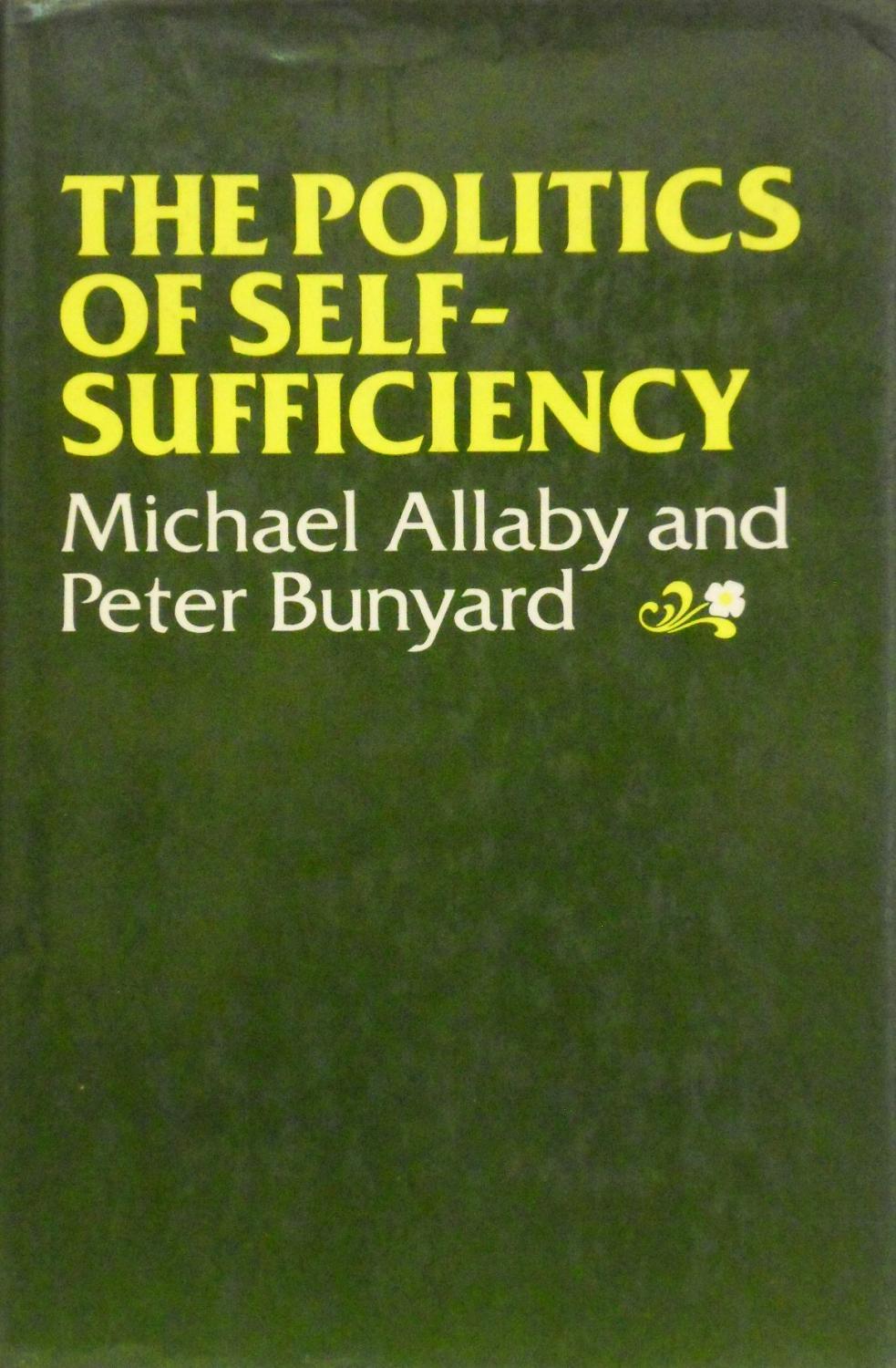 And during the 70s and 80s you personally had a number of books published...
There was a book I wrote with Michael Allaby. We didn't see eye-to-eye, so the book took the form of a debate and it was called The Politics of Self-sufficiency (Oxford University Press - right). And I wrote books against nuclear power during those years.

James Lovelock was a near neighbour at this time...
In the late 80's we saw quite a lot of Jim. And on three successive years (starting in 1988) Teddy and I arranged symposia on Gaia, and we published the proceedings. They took place in Camelford at Worthyvale Manor.

A couple of years after that I published a book Gaia in Action in which I picked some of the most interesting contributions to those meetings. And I think its a good account of scientists’ thinking about the earth from a Gaian point of view; in terms of its evolution. Mae Wan Ho was one of the contributors, and Brian Goodwin and James Lovelock and Lynn Margulis.

Jim Lovelock was living on the Devon-Cornwall border, but his postcode was Launceston.

Can you think of other events that were significant during that period?
There was the whole business of the intention to build a nuclear power station down here. That was 1981, in Luxuylan (picture below). The elecricity board, CEGB, came down and carried out some drilling on the site where they were considering building a power station. And for six months we managed to hold the CEGB at bay.

CND were not involved at the time. They’d got it wrong about civil nuclear power which they thought was fine. But they changed their tune later on when it was discovered that plutonium was being shipped to the States in return for tritium so we could make our hydrogen bombs. It all came out in the Sizewell B public enquiry. 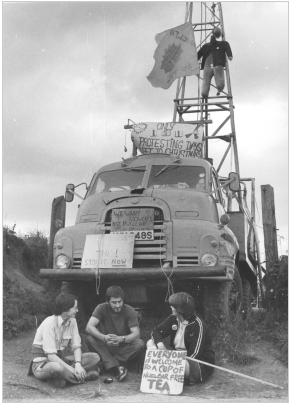 Were you Involved with wind-farm in Delabole?
No, but I knew Peter Edwards, and it was a fantastic move on his part. His was the first wind-farm in the UK. Then there was the wind-farm on St Breock Downs, where there was a lot of protesting. And I made it clear that I was so much in favour.

I am in favour of wind, though not so much the way individual farmers have set up machines in various places. People in the locality of wind-farms should have some share in them, so that they would be seen to be helping the local communities where they are sited. I think that's being considered, and I’ve always thought that was the right way to develop windfarms.

Why did The Ecologist move away from Cornwall, where it had been based for nearly 20 years?
Nicholas Hildyard became involved. He and I had an arrangement in the late 80's, whereby for two years one would edit The Ecologist, and then the other would.

I edited it for two years, then when Nick took it over he did a deal with Teddy that he would take The Ecologist with him to Dorset. At that time he was establishing The Cornerhouse, and he took it away from Cornwall and when he did, it changed. The people who were with him at The Cornerhouse were radical and strongly feminist on one front. And Teddy at that time felt quite alienated from the Ecologist. Then there was a row between Nick and Teddy about an article that Nick had published that suggested that Teddy's views could be interpreted as a kind of neo-fascism. And this dismayed Teddy.

At that time Zac Goldsmith was in his early 20's. He'd been looked after by Helena Norberg-Hodge and he'd gone to Ladakh as a result of that. Helena was based in Totnes, Dartington at the time. Zac then became editor of the Ecologist, and that's when it went back to London.

What have you been doing more recently?
I've been going to Colombia a lot. In the last three years, after 50 years break, I've gone back into doing research. And my research is looking at an interesting theory called the 'biotic pump theory' which has got up the nostrils of climate scientists who originally said the theory is rubbish.

Having read the scientific articles by two Russian scientists, I was really hit by how very Gaian those articles are, but with absolute fundamental physics underlying them. So I've built an experiment here that is about 5 metres high in a field, and I have convinced myself and a few others that they are right. Which means that all the other climate models are wrong in terms of how they understand the processes of convection whereby the air masses move in different parts of the planet.

And what it means is that the forest is far, far more important than is given credit, even by those who are really wanting to conserve and protect forests.