{gallery cols=1 maxcount=1  alignment="before-float" preview_margin="5px 10px 5px 0"  preview_width=150 preview_height=150 filter-include="pv_mb0028*"}phocapreviews/PEOPLE{/gallery}The first election was called in February, 15 months early, by Conservative Prime Minister Ted Heath who was facing massive economic upset (20% inflation, 3-day working week imposed by the government) on the slogan "Who Runs Britain". Despite being widely expected to win an increased majority, in the event Labour came out as the largest single party with 301 out of 623 seats. After the 297 seat Conservatives failed to form a coalition with the Liberals, Harold Wilson formed a minority Labour government.

This was only 12 months after the initial public meeting in Coventry that led to the formation of PEOPLE (see chronology). There had been initial contacts between the Ecologist/Movement for Survival group in Cornwall and the PEOPLE group in Coventry. PEOPLE had agreed to merge (in effect take over) the Movement for Survival since the Ecologist group did not have the capacity to run the organisation.{gallery cols=1 maxcount=1  alignment="after-float" preview_margin="5px 10px 5px 0"  preview_width=150 preview_height=150 filter-include="pv_ec0003*"}phocapreviews/publications/Offprints{/gallery}

The election was called on 7th February with polling taking place on 28th. This gave Teddy Goldsmith barely time to write a trenchant editorial for the February 1974 issue of The Ecologist entitled "Britain's ecological party".

Goldsmith opened the editorial, which ran to two full pages, some 1800 words, in typical style:

"What is this election about? Does anyone really know? Have either of the major parties worked out a constructive long-term policy? Have either of them told us where we are going, what sort of society they are creating for us? The answer is unfortunately no. They are simply criticising each other over their respective handling of such secondary issues as the Miners' strike or Britain's entry into the Common Market. Both parties intend to go on muddling through on a day-to-day basis dealing with each problem as it occurs, in that way which is most politically expedient, accommodating each new trend, however socially disruptive it might be, rather than making any attempt to reverse it. "

After rehearsing the ecological position and problems inherent in the way things were organised he finished with the announcement that a new ecological party would be standing in the election.

"The more we look at it the more it is apparent that economic growth is a device for providing us with the superfluous at the cost of the indispensable. What then do we do? In January

1972 the Ecologist published what has now become a famous document: A Blueprint for Survival. It attracted a great deal of attention and has since been translated into 16 languages. It has also given rise to political parties in New Zealand, Tasmania and Alsace, and has at last done so in Britain. People is a new party. It has adopted the Blueprint as its basic theoretical statement. It already has 40 active groups throughout the country and in June is organising a convention to which there should be 1,000 participants. At this election it is putting forward at least six candidates who will contest seats at Hornchurch, Liverpool, Leeds, Eye and two at Coventry. At the next election it will field 600 candidates.

Being a "snap" election it was difficult for the fledgling organisation to field candidates. Teddy himself agreed to stand in Eye in Suffolk - his father's old constituency. 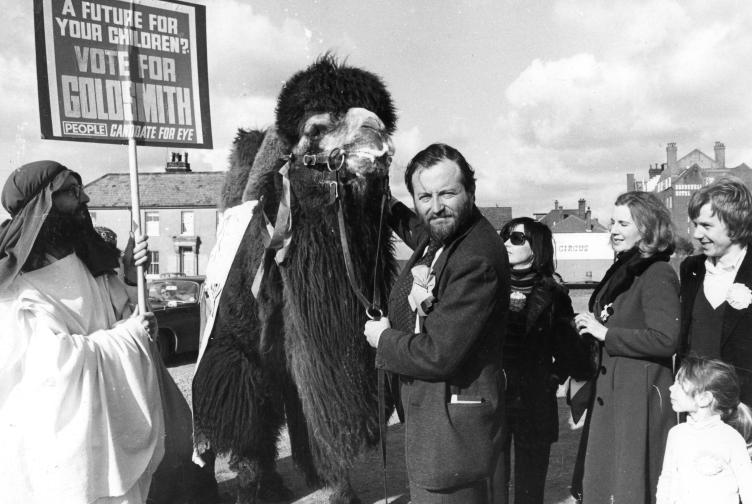 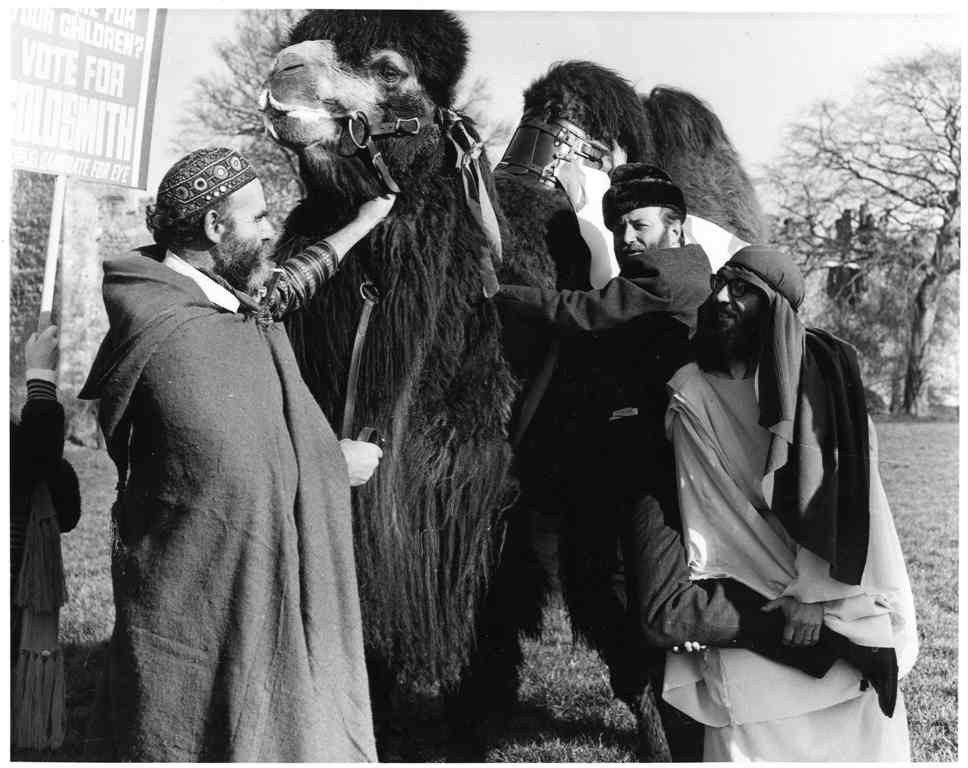 {/modal}With his flair for publicity he persuaded is old friend and travelling companion John Aspinall to loan him a camel from his zoo and he recruited a group of hippie types to dress as Arabs as his retinue. He toured the constituency warning that Suffolk might become a desert if environmental damage was allowed to continue unabated. (click images to enlarge)

{/modal}Elsewhere Lesley Whittaker, one of the original "Gang of Four" who founded PEOPLE stood in Coventry and Clive Lord, the party Secretary, stood in Leeds.

Detailed guidance to potential candidates and election agents was produced. The deposit to stand was then £150 - equivalent to about £1660 in 2017 values so a substantial barrier for a new underfunded party. In the event the six candidates who stood were:

A total of 4,576 votes were cast for PEOPLE candidates.

{gallery cols=1 maxcount=1  alignment="before-float" preview_margin="5px 10px 5px 0"  preview_width=150 preview_height=150 filter-include="pv_mb0028*"}phocapreviews/PEOPLE{/gallery}{gallery cols=1 maxcount=1  alignment="after-float" preview_margin="5px 10px 5px 0"  preview_width=150 preview_height=150 filter-include="pv_mb0030*"}phocapreviews/PEOPLE{/gallery}There does not seem to have been a formal manifesto published, but Michael Benfield's archive contains four pages that appear to have been published as Teddy Goldsmith's Election Address in Eye. The front cover under the title "A Future for Our Children, An Environment fit for PEOPLE" declares it "A political statement by PEOPLE" so it may also have been used elsewhere. Inside the Ecologist editorial is reprinted on two pages of densely packed text and the final page is a flyer for Teddy.

{gallery cols=1 maxcount=1  alignment="before-float" preview_margin="5px 10px 5px 0"  preview_width=150 preview_height=150 filter-include="pv_dt0047a*"}phocapreviews/PEOPLE{/gallery}During the summer PEOPLE held its first national conference in June in Coventry. Goldsmith had agreed to draft a manifesto for adoption but was travelling and nothing appeared. Lesley Whittaker ended up drafting the entire manifesto herself, very largely based on Blueprint for Survival. The draft was circulated to members and around 150 amendments were discussed at the conference prior to its formal adoption.

This time PEOPLE managed to field five candidates with two of them standing as "People and Agrarian Party" in Essex. This was a closely aligned spin-off set up by Ben Percy-Davis, a trained ecologist. Of the previous six candidates and constituencies only Lesley Whittaker in Coventry NW and Ben Percy-Davis in Hornchurch were able to stand again. The Leeds group remained active and a Birmingham seat was also contested.

In the event the results seem slightly disappointing with only Ben Percy-Davis holding his vote share, and Leeds East doing slightly better than Leeds North East earlier in the year. The total of 1996 votes was less than half the total in February.

Overall the second election resulted in a small Labour majority which enabled them to govern for a full five year term until 1979. The PEOPLE manifesto was subsequently re-written coordinated by Peter Allen and the new version was adopted at the summer 1975 conference in Coventry.