A Teach-in for Survival
Article info

Blueprint for Survival was widely read and attracted much interest - not least among students. At the beginning of the 1971-2 academic year there were approximately 18 student environment-action groups, by September 1972 the Ecologist reported that there were over 100 such groups[1].

As can be seen from the Ecologist report many of these groups focused on practical action - often outside their ivory towers. The Ecologist noted "Already one or two environment groups are beginning to realise that perhaps they should be actively campaigning for changes in the structure and content of higher education in this country, not an easy campaign, and one fraught with problems and pitfalls, but in the long term one which could have the most impact."

One group that took a practical step in this direction was formed at Queen Elizabeth College in London University (QEC). The prime mover appears to have been an MSc Nutrition student called Michael Schwab assisted by a small group of other QEC students. Having read Blueprint for Survival they decided to create a "Movement for Survival" group at the college.

The group had two aims: "to spread awareness of the environmental predicament of man [sic], and to initiate localprojects.[2]". The first aim led them to set about organising a Teach-In to explore the implications of Blueprint for their own benefit. This was conceived as an all-day event at which they would have invited speakers - theorists, politicians, industrialists and trade-unionists, with plenty of time and opportunity for discussion and audience questions and participation.

Michael Nelson, another MSc Nutrition student involved, wrote in the postscript to the proceedings "The purpose of the meeting was to discuss how man can minimise his impact on the environment, so that he does not fall prey to his own creativity in making a world that can no longer support him."

The concept was that it would be a forum for debate and an educational exercise for all. The morning was to be spent discussing the predicament outlined by the Blueprint and the possibilities of reversing the trends. The afternoon was intended to be a discussion of action. Teddy Goldsmith agreed to give the keynote address for the afternoon introducing discussion of how to bring about change within the established political machinery of society. 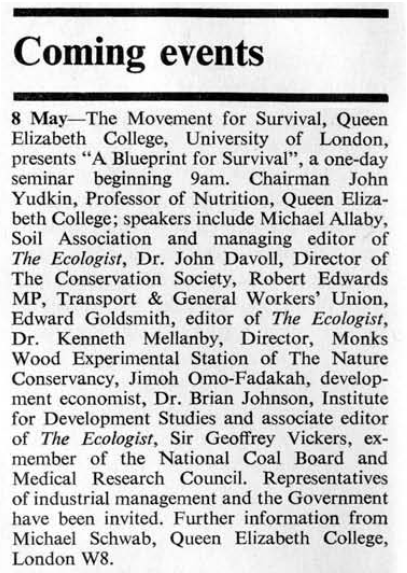 Having recruited Prof.John Yudkin from the international highly regarded Nutrition Department at QEC to chair the event, they managed to get a fairly impressive range of speakers, but they failed in the ambition to get someone, from any level, to speak for the the Government. This left something of a void although they did get Bob Edwards MP (an elder statesman of the Trade Union movement), and Sir Geoffrey Vickers (with a lifetime of experience in public administration including the National Coal Board and Medical Research Council), as well as John Langley (a director of Imperial Tobacco and member of the CBI) to represent Industry.

A small advertisement appeared in the April issue of the Ecologist advertising the event, which was also publicised through internal and external student channels (QEC student Ian Brown organised the publicity with great success). QEC and the Students Union were persuaded to provide financial assistance the event, so that only a nominal entrance fee was charged.

The response was very positive and it soon became apparent that the largest room at QEC would not really be sufficient for the likely attendance, so the venue was switched to the Great Hall at Imperial College just up the road. In the event over 500 people turned up.

To some extent reading the contributions shows that the organisers did succeed in getting opinions from both the radical and the reactionary environmentalist camps - on the one hand the Blueprint authors looking for radical changes in the technocracy, and on the other hand Langley, Edwards & Mellanby representing those believing that the status-quo would deliver the needed responses. In the event the audience was largely antagonistic to the points from the latter group - but the audience was far from the man-on-the-clapham-omnibus.

In writing the postscript to the book Michael Nelson clearly identifies the problem that has plagued the ecological and political green movement ever since: "The Teach-In was elitist - it was attended primarily by people who were already truly aware of the environmental crisis .. It was thus a meeting place more than an educational forum."[3].

Only the last two speakers, Sadler and Madron, started to focus on the need for a grass-roots change in consciousness. Goldsmith had set out the pitch - the political path through the creation of a constituency based Movement for Survival which would "influence a candidate, regardless of  party affiliation, to commit himself [sic] to a programme of change such as that in the Blueprint"[4]. He then saw this Movement morphing into a new party committed to the implementation of an environmentalist programme at some point in the future.

Sadler, with a better understanding of the reality of politics was clear that neither the capitalist market economy, nor the political system that supported it, would be capable of delivering the required changes and the need to take decision making out of the hands of an elite and implement changes to the actual power structures of society from the grass roots.

Madron actually proposed a practical mechanism, through the use of television technology, to implement grass-roots led decision making. Reading his contribution 50 years later it is possible to see that he what he was reaching for was the concept of citizens assemblies, as demanded by XR today, facilitated by use of advanced communication tools such as the now ubiquitous Zoom conferencing.

Of course in the intervening years the television industry itself has lost sight of its 'mission to inform' and the desire to 'hold up a mirror to society', having been completely captured by commercial interests. It now operates, as we see today all to clearly, as a tool for the elite to tell people what to think.Sadly much of the new media space has also been lost as "social media" platforms are now becoming heavily censored and antagonistic to any non-establishment line of thought.

As a whole, reading the Teach-In today, whilst revealing some attitudes that now seem somewhat naive, shows that all of the problems, the root causes, and the need for transformative change in social consciousness as a necessary precondition for political change, were well understood 50 years ago. And yet nothing significant has been achieved towards the goals set out in the Blueprint and articulated during the Teach-In during the intervening 50 years.

Subsequently the students involved graduated and moved on. The first UN Conference on environmental matters in Stockholm[5] kicked the can down the road as has every COP since. The Ecologist organised a conference in London in September which between 100 and "several hundred" people attended - reports differ - and Blueprint did lead to the founding of a political party (PEOPLE, later the Ecology, then the Green Party) the following year.

The QEC Principal's report for the year 1971-72 includes the note "A further very successful event was organised by one of the Nutrition students, Mr Michael Schwab. This was a symposium on the ‘Movement for Survival’ and, since it drew an audience of 500, it was held in the Great Hall of Imperial College" 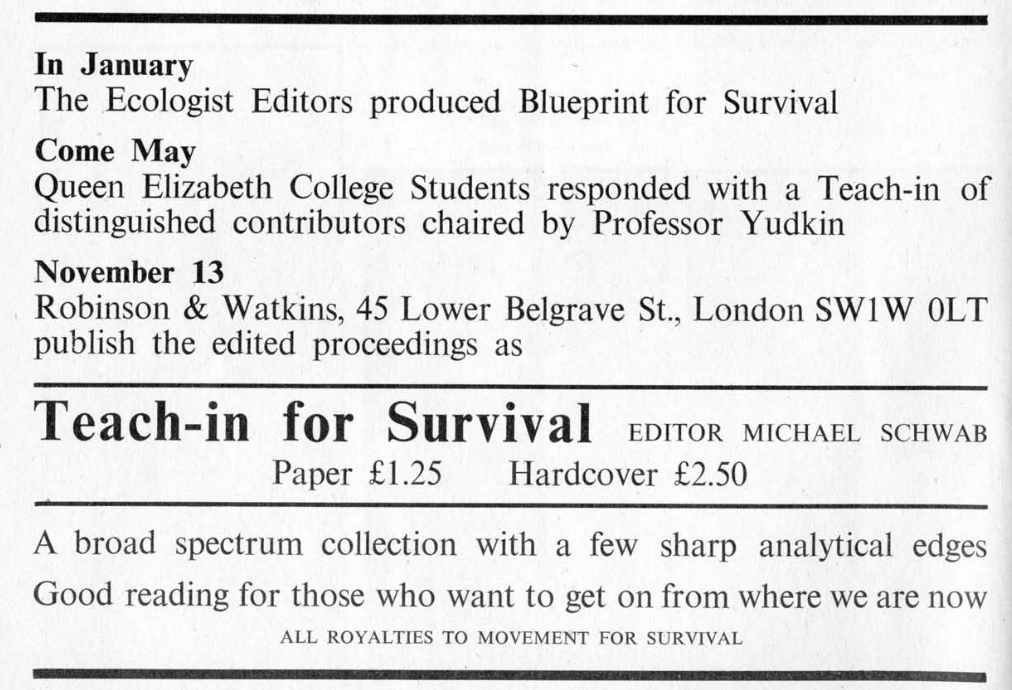 The proceedings of the Teach-In were recorded and transcribed for publication as a book. Published by Robinson & Watkins it came out in paperback form on 13th November 1972. An announcement in the November edition of the Ecologist stated that all royalties were being donated to Movement for Survival. We have not yet been able to find sales figures or whether any funds were actually delivered to MfS.
Although long out of print, secondhand copies for sale can sometimes be found through an internet search.

If you attended the Teach-In or were in any way involved in it, we would very much like to hear from you - drop us a line at This email address is being protected from spambots. You need JavaScript enabled to view it.

A Teach-in for Survival

Much of the material in this article is drawn from the Introduction and the Postscript to the book, "Teach-in for Survival", of the proceedings. We would very much like to hear from anyone who remembers attending the event or who was involved in organising it.